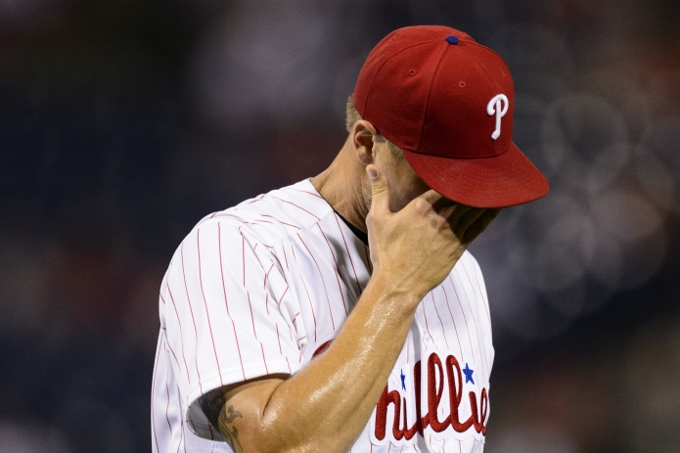 After a very inactive trade deadline this year, talks have intensified among analysts about pushing the trade deadline back in the season, perhaps two weeks into August, perhaps until the end of August. Just two weeks ago on July 31st, there were more teams that considered themselves buyers than sellers. Half of the league was within six games of a playoff spot. 20 teams were within nine games of the playoffs, and four more were within 11. A lot of general managers had the feeling that they were just one run away from being in the thick of the race.

Flash forward to today, August 12th. In the National League, only the Diamondbacks and Nationals are less than ten games out of a playoff spot. The same five teams on top of the National League standings have intensified their collective grip on playoff berths, as all five have at least a 93% chance of making the playoffs, according to Baseball Prospectus. Over in the American League, there are only four teams still in the hunt aside from the five playoff teams. So that number of 20 teams in the race has been slashed down to 16, with two of those more than six games out. It's not much of a buyer's market anymore.

What would have happened if the trade deadline was pushed back to say, August 15th? Given the status of the standings at this time, we can make a few educated guesses as to what would happen.

-The Phillies would start selling off parts. Michael Young would *definitely* be gone (though he might not even finish the season with Philadelphia), and Jonathan Papelbon might have left town as well in the face of scorn from the fanbase due to his struggles on the mound.

-The Royals might be looking at an outfielder that's more of an upgrade than Justin Maxwell. Maxwell was the only acquisition that Kansas City made at the deadline, and many scoffed at it at the time. But in just nine games with his new club, Maxwell is hitting .450/.522/.900, making Dayton Moore look like a genius in the process. At the end of the day though, he's still a platoon bat, and the Royals probably could have done better. With the team making a borderline miraculous run in the AL Central, settling for Maxwell instead of acquiring someone like Alex Rios may come back and bite them.

-The Yankees probably wouldn't have traded for Alfonso Soriano. When New York acquired Soriano on July 26th, they were 54-49 and seven games back in the AL East. Today, they're 59-57 and ten games back. Sure they didn't give up much of anything in return for Soriano, but he hasn't exactly pushed them over the top, hitting just .204/.232/389 in 14 games with the club.

-The Indians wouldn't have stood pat. Cleveland made one deadline move, and it was so far under the radar that I didn't write about it: picking up LOOGY Mark Rzepczynski from the Cardinals. With the Tigers awakening and starting to run the AL Central and the Royals breathing down their throats, the Tribe really needed to make a move. I'll give Chris Antonetti credit for pulling the plug on the Mark Reynolds experiment (who nearly had as many strikeouts as total bases) and by sticking the course with a young core of players, but this team needed something to stay in the race over the season's final two months.

-No one would have cared about Biogenesis. Two players from potential playoff teams got suspended: Nelson Cruz and Jhonny Peralta. Both teams acquired suitable replacements after the Rangers picked up Alex Rios for a bargain basement price compared to Chicago's initial asking price last week. All of those words spilled about the potential suspensions, and we get…well, what we got, which wasn't much of anything.