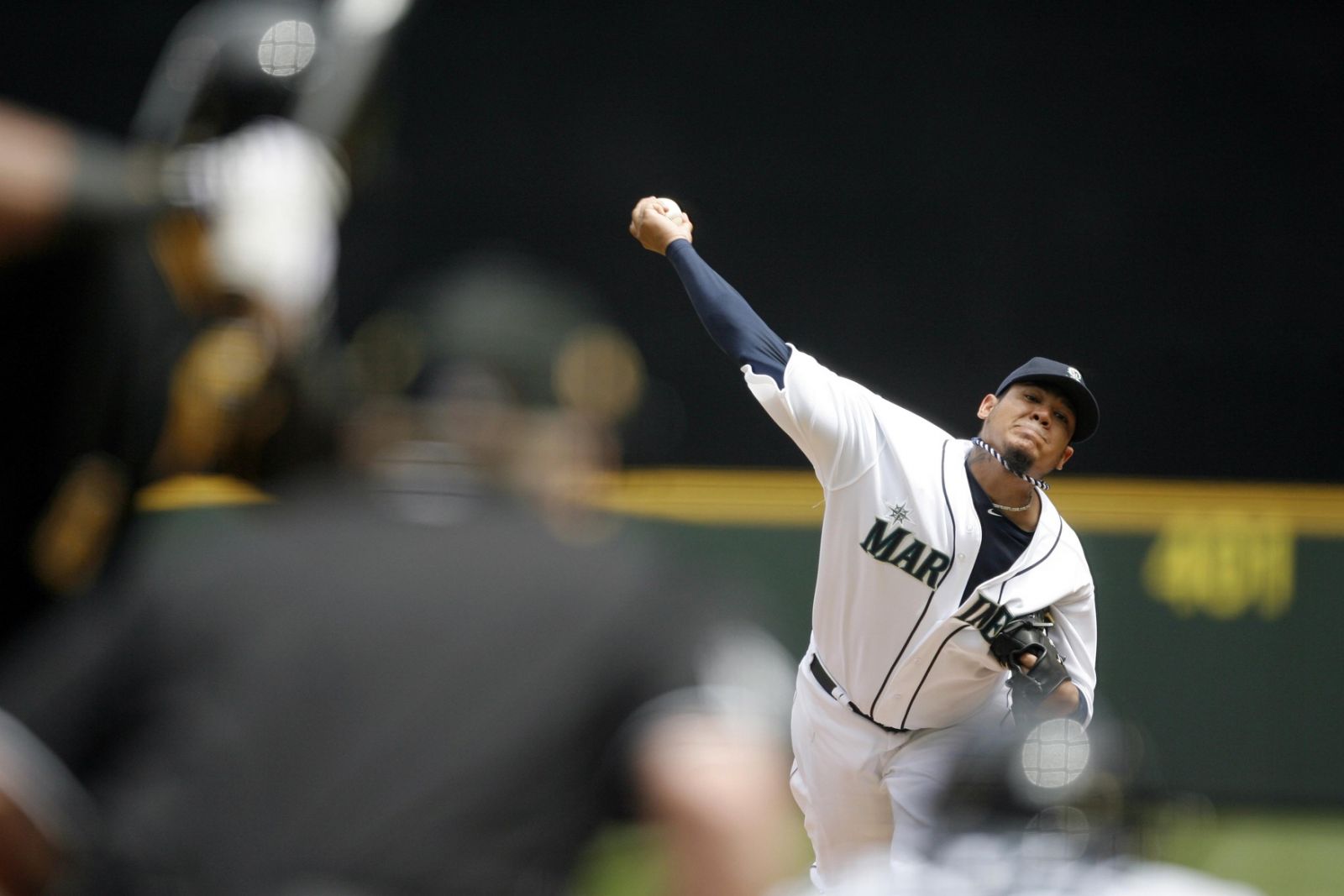 It was a two horse race in our voting for the AL Cy Young award. And while neither of that duo involved is really a breakout star in 2013, they're new faces in the sense that neither finished in the top three in each of the last two years of voting. Oddly, neither of the winners last year received even one vote this year, along with none of last year's top three or *any* player to pick up a vote in 2011. This year, David Price and Justin Verlander have taken a back seat to these two guys.

But by just a two point margin, we're bowing to the king.

TOC's midseason winner of the AL Cy Young award is Felix Hernandez of the Mariners.

Throughout his stellar career, Felix Hernandez has continually impressed fans across the game. The 27-year old has three top five finishes in the AL Cy Young voting (including a win in 2010), and has four All-Star nods in his last five seasons. This year however, Hernandez is setting the bar even higher. In an AL-high 138 2/3 innings, Hernandez has struck out 140 and walked 26, giving him career bests in both strikeout and walk rate along with a 5.38 strikeout to walk ratio that is the second-best in the American League to just teammate Hisashi Iwakuma (more on him later). The King also leads the American League with a 2.53 ERA , and has even picked up ten wins, a rarity in recent years given how awful the Mariners have been. It doesn't get much better than Hernandez right now.

Max Scherzer was the runner-up to Hernandez in the voting, finally breaking through in 2013 after showing flashes of brilliance in the past. The AL's All-Star Game starter is 13-1 this season with a 3.19 ERA and is second in baseball with 152 strikeouts this season. His 4.90 strikeout to walk ratio is behind just the aforementioned Iwakuma and Hernandez in the AL. It's like splitting hairs between the two, and while Scherzer's overall record would probably give him the advantage among the voting pool for the award, Hernandez's overall better year gets him the nod.

Yu Darvish of the Rangers was our third-place finisher thanks to a first half that saw him log a major league leading 157 strikeouts in 119 1/3 innings. Darvish has also dropped his ERA nearly a run from a year ago to 3.02 while pushing his strikeout and walk rates in the right direction, but a DL stint has muted some of the hype around him this year. At any rate, he's had an awesome season thusfar and could make a push for the award in the second half.

We now move into the "others receiving votes" category, where Chris Sale of the White Sox leads the pack. The 24-year old Sale has an ugly 6-8 record this year, but he's pushed his strikeout rate up by nearly a full batter per inning while also dropping his walk rate. His strikeout to walk rate is right behind Scherzer's, and if four of those losses were wins, there would be a lot more love for Chicago's ace. Bartolo Colon of the Athletics got some support from our voters as well, thanks to a resurgent year spurred on by 1.07 walk rate that is the lowest in the American League. I hate to keep harping on strikeout to walk ratio, but he's right behind Sale in the AL's rankings, and Colon will probably end up with his best season since 2005, when he won the AL Cy Young award. Finally, there's the aforementioned Hisashi Iwakuma, who isn't getting much attention from the mainstream press due to the presence of Hernandez in the Mariners rotation. But Iwakuma has struck out nearly six times as many batters as he's walked this year, leading to a solid 3.02 ERA.