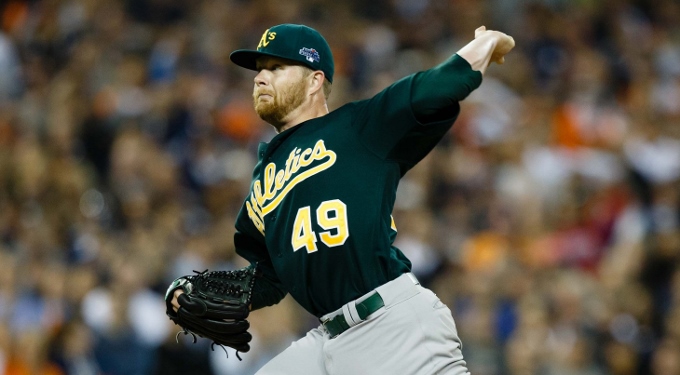 The Oakland Athletics and Colorado Rockies have completed a long-rumored trade, with Oakland sending starting pitcher Brett Anderson to Colorado. In return, the A's will receive pitchers Drew Pomeranz and Chris Jensen. Oakland will also be sending $2 million to cover some of Anderson's contract in the trade.

Anderson, who will turn 26 in February, has dealt with injuries over the last three years. Tommy John surgery ended his 2011 season in June, and recovery from the surgery and a strained oblique sidelined him for all but six starts in 2012. This past year, Anderson sprained his ankle at the end of April and a fractured foot would put him out of action until the end of August. Upon his return, Anderson worked exclusively as a reliever, pitching to a 5.74 ERA with 17 strikeouts and six walks in 15 2/3 innings after being activated from the DL.

When he's healthy, Anderson looks like a perfect pitcher for Coors Field. He gets ground balls at a rate comparable to the best pitchers in the league (54.9% career, has risen every year), doesn't give away many free passes (career 2.40 walks per nine, inflated by a rough 2013), and gets his share of strikeouts. He'll make $8 million in 2014, and the Rockies have an option for $12 million on Anderson for 2015.

The marriage between the Rockies and Pomeranz never really got off the ground after Colorado acquired him in 2011 from Cleveland as part of the Ubaldo Jimenez trade. The 25-year old made 34 appearances in the majors, all with the Rockies, striking out 115, walking 70, allowing 18 homers, and pitching to a 5.20 ERA in 136 2/3 innings. I'm not sure how much you can blame the altitude, because in 132 2/3 innings with AAA Colorado Springs, Pomeranz has only allowed eight homers to go along with 142 strikeouts and 53 walks. He dealt with biceps tendonitis this summer, but struck out six hitters in five innings without allowing a hit once returning from the DL in September.

The 23-year old Jensen didn't rank among Colorado's top 30 prospects coming into the year. He spent the year with Modesto of the high-A California League, striking out 136 and walking 39 in 152 1/3 innings.

This trade looks solid from both ends. Oakland is building to win in 2014, and they can't count on Anderson to stay healthy after he's thrown just 163 innings over the last three seasons. He's a guy that could thrive in Colorado, and is definitely worth a shot for the Rockies in their rotation. As for Pomeranz, he needed a fresh start. Things just weren't working out well for him in Denver, and he could thrive at O.co Coliseum with a lot less pressure on his shoulders.