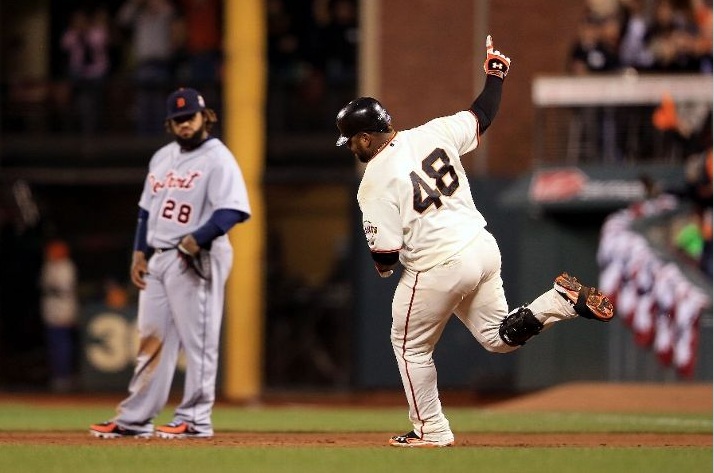 The San Francisco Giants beat the Detroit Tigers 8-3 in game one of the World Series, taking a 1-0 series lead.

The Giants win in this game can be tied to two players: Pablo Sandoval and Barry Zito. Sandoval went 4/4 with three homers and Zito allowed one run on six hits over 5 2/3 innings, walking one and striking out three. The combination of power and pitching allowed the Giants to trounce Justin Verlander  and limit the Tigers offense to nothing.

Sandoval's three homers were sandwiched around more scoring by the Giants. His first homer was a solo shot in the first inning to center field, giving them Giants a 1-0 lead. In the third inning, NLCS MVP Marco Scutaro singled home Angel Pagan, who had reached on a double that skipped off the third base bag. Sandoval followed the single with his second homer of the night, a two-run shot that extended the Tigers lead to 4-0. In the fourth, the Giants got another run when Zito took an ugly swing at a ball and willed it past a divivng Miguel Cabrera at third, allowing Brandon Belt to score after a terrible throw from Delmon Young. Then in the fifth, Sandoval hit his third homer, making the game 6-0. Each team would add more runs late, but the game was over by then.

Verlander's outing was not what the Tigers wanted to see at all. The 2011 AL MVP and Cy Young winner lasted just four innings, allowing five runs on six hits, walking one and striking out four. The Giants make Verlander work, forcing him to throw 98 pitches in those four innings and putting extra stress on Detroit's bullpen.

The Tigers offense got nothing going all night. They had just two extra base hits: an Austin Jackson double in the sixth that led to the first Tigers run, and a two-run homer by Jhonny Peralta in the ninth. That was it. The team went just 1/5 with runners in scoring position, with three of those at bats coming in the sixth inning. Detroit just got outclassed in Wednesday's game.

It's also worth noting that the Tim Lincecum: ace reliever experiment continues to thrive, as the former two-time NL Cy Young winner struck out five in 2 1/3 perfect relief innings.

Game two of the series will be Thursday in San Francisco at 8:00. Doug Fister gets the start for the Tigers, and Madison Bumgarner will be on the hill for the Giants.