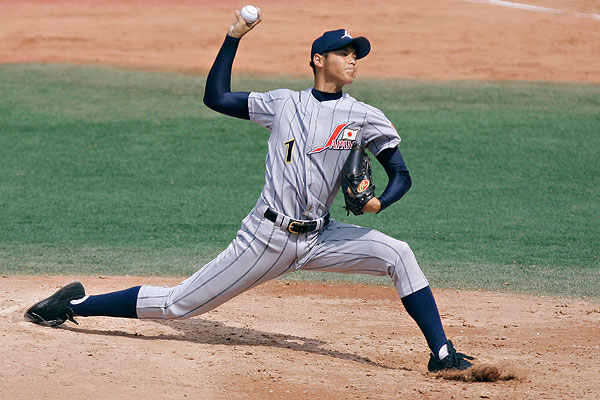 We touched on Japanese prospect Shohei Otani's desire to come to America earlier this week. Otani was indeed drafted first overall in Japan by the Nippon Ham Fighters, and when that happened, everyone in American essentially threw their hands up and said that Otani wouldn't be able to sign in America until this coming March. But in an article on Baseball America by Ben Badler, he debunked that line of thinking. Badler said that Nippon Ham's drafting of Otani only gives them exclusive negotiating rights among other Japanese teams, and that it has nothing to do with his ability to negotiate with an American team.

This will create a very interesting dilemma for both NPB and MLB. If Otani signs with an American team this winter, there is going to be a potential conflict with Japanese and American amateurs. There is currently a gentlemen's agreement between the leagues to not sign amateurs from the other country, but Otani signing with a MLB team despite the Fighters controlling his Japanese rights could cause a firestorm. What's stopping a NPB team from offering an American amateur a wheelbarrow full of money to come to Japan? For example, what if Mark Appel opted to sign with the Yomiuri Giants after they offered him the equivalent of $10 million US as a signing bonus? I don't think this would have a very large chance of happening given the relative lack of salaries comparing MLB and NPB, but it's still something that's on the table.

By the same token, if the Fighters *do* sign Otani and post him, he'd still be subject to the international signing bonus cap of $2.9 million. This late in the signing period, it would be tough for a team to give him a large bonus and the potential rewards for Otani playing in America would be based more on the merits of the situation as opposed to a financial benefit. Otani also wouldn't be subject to the international signing guidelines in five years under the new team, which exempts players that are at least 23 years old and have had at least five years in a recognized pro league (such as NPB).

It's probably in Otani's best interest to sign with the Fighters. He could probably get a comparable bonus from them as he could from an American team at this point in time, and he wouldn't be rotting away in the low minors and subject himself to an intense amount of scrutiny by the US media and fans. If Otani does thrive in Japan, Nippon Ham could post him in five years, and Otani could get a lot more money than he would likely get this winter. Otani should look at the case of Junichi Tazawa, who signed with the Red Sox prior to the 2009 season and didn't make a substantial, positive impact in the majors until 2012. In Japan, he could thrive as a rock star in the NPB, while in America, he'd be just another guy with extremely high expectations.