It's been an interesting week with the plagiarizing/fake insider Twitter account MLBSportsReport, and the cavalcade of nonsense surrounding it all. After some digging, I do believe I've found the culprits behind all of the accounts. There may be more, but this is what I've got right now.

I'm going to start by admitting I made a mistake. I initially fingered a fellow by the name of @FloridianFalcon, then reneged on my labeling him as a connection. Well, now I'm going to admit that I was wrong once again, and that he is one of the people behind the account goodness. Another one is a guy who went by the handle @MitchNemeth6, and has now changed his account to @LosBravos22, and protected it. Finally, there's a third user who is currently in the wind named Evan Langfelder, who used to have the handle @datdudeel (gee, unique). Here's a Google cache of his Twitter from the end of June, relentlessly spamming accounts and claiming to be an ESPN Braves blogger…which we all know is a total lie (as I wave at the guys from Capitol Avenue Club).

Now, how did I link all these people together? Simple: because they're inexperienced, sloppy children. Here's a fake Dan Uggla account that right there in the profile admits to being run by Nemeth. The account is ridiculously sloppy, mixing in personal tweets along with the humorous tweets from the fake Uggla. He even has a conversaion with a fake Harper account, but more on that later. The fake Uggla even tweets MLBSR, telling him he's a fake. Aww, how sweet, trying to throw up a smokescreen. There are also some tweets to the now-suspended Zack Greinke account that we talked about a few days ago that MLBSR "confirmed" was real (and we confirmed that he was running it), *and* he was RTing the Bad Luck Bryan account linked to the empire as well. Quite frankly, the further I go back in the account, the more I think that it was just an account that had a name change.

Now, let's roll back a little bit to FloridianFalcon. Remember that Evan character, who was spamming people telling them to follow a now-suspended FranconaESPN account? Well….

Oh. Well then. That's a whammy. There are also a number of tweets to the @datdudeel account in his timeline where I can't view the entire conversation, because the account has been deleted. Awww. There are also a pair of tweets to a since deleted Bryce Harper account (@capitolthrill34) that was attempting to come off as a real one, using the RT garbage contests made so infamous by MLBSR. 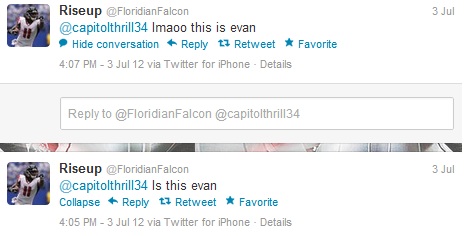 Of course, his buddy Evan. You know, the guy he was going to go to the World Series with. There are also a few tweets back and forth between Falcon and Nemeth, but we can't view the context of Nemeth's due to his account being protected (ironic, huh?). Now, the most damning piece of evidence linking Falcon to all of the fake accounts…

Yeah, telling your friend to go tweet from "Harper account", meaning the fake one…genius. There's also this, linking Falcon to yet another one of the accounts.

Anything else? Not really, just a bunch of RTs from the fake accounts. Oh, and there's this, which pretty much shoots his little "I GOT DUPED!!!" story in the face.

Yeah, calling someone an impostor, and then three and a half hours later, bragging about going to the World Series. Brilliant.

As for the fake Harper account? Well, it's listed in the info of the Uggla account (along with a fake Matt Kemp account), and it's not particularly funny…like the Uggla account, it's essentially centered around sex jokes and vulgarity, along with some painfully unfunny game commentary as wel. I'd expect nothing less from a group of geniuses that had to plagiarize from Bleacher Report.

Remember that fake Andre Ethier account touted by MLBSR? Well, the account is gone…but traces still remain. When you do a search for a Twitter user (for example, I searched for Andre Ethier this time), you get a list of accounts either named that, or with that name in their info. Of course, this came up and didn't jive…

Jesus Nino Torres? What the hell? Well, it's the Ethier account. But, the creator wiped out the following list without touching the follower list….so among Mr Torres's 282 followers are numerous Dodgers fan, including one that put him on a list entitled "Baseball players". Yep, that happened.

And there you have it. Speaking of that type of situation, MLBSR ran a RT contest tonight for World Series tickets (which is funny, because World Series tickets aren't even sold until the end of August, and shipped until the middle of September under every circumstance I've had), and the winner was a random fellow named @armydad84. Of course, the first tweet on this account came at 11:26 PM on Wednesday, and he started going on and on about winning the tickets at 11:38 PM….so there's that. Also, the first tweet talked about his daughter talking him into signing up for the account tonight….but the account was created last month. I'm thinking it's another fake that got a name change, but I have no idea which account it is. The goons did the same thing with this account that they did with the Ethier one, wiping out the list of following and creating a new one. But oddly enough, the military follows are at the top of the list, indicating they were the freshest, while random accounts sat at the bottom of the the list, indicating they had been there longer. You'd think a proud army veteran would follow @USArmy and @GoArmy before a "verified vampire", or a teeth whitening device, or Puerto Rican fashion photographer based out of New York, but I digress. Oh, and the Salvation Army account he followed was the Canadian one, not the American one.

I think that about wraps this saga up. So Mitch, Evan…nice try, guys. Considering that in another tweet, Falcon said he was 15, about to be 16, maybe you guys should focus on making something with your lives instead of screwing around on Twitter all day. Leave the conversing to the adults, please.