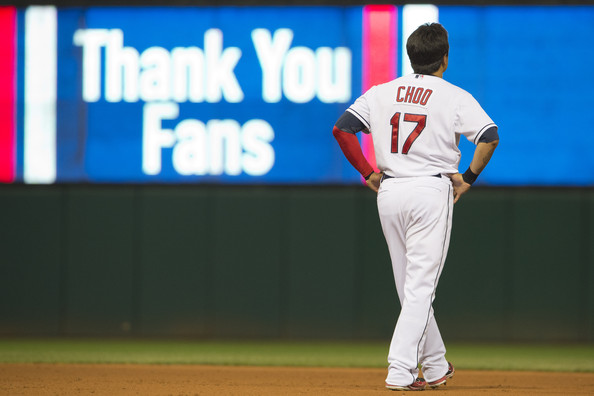 A report from Jon Paul Morosi of Fox yesterday stated that the Boston Red Sox have interest in starting pitcher Justin Masterson and outfielder Shin-Soo Choo of the Cleveland Indians. Jon Heyman of CBS also reported earlier this week that in addition to Masterson and Choo, teams were inquiring about shortstop Asdrubal Cabrera and closer Chris Perez. But would it make sense for the Indians to trade these four players and attempt yet another rebuild?

The answer on the surface seems to be a resounding yes. 2013 will be Choo's final arbitration year, and he'll be hitting the free agent market next winter. Choo reportedly has shown no desire to return to Cleveland on a long-term deal, and with Scott Boras as his agent, it's unlikely that he'd sign an extension before next winter anyway. The 30-year old Choo took a step back from 2009-2010 prime over the last two years, playing just 85 games in 2011 but playing in a full complement in 2012, seeing his slash stats fall across the board from his career marks. He's not going to be a very productive member of the club if he's still with the Tribe in three to five years, so it would be better to deal him now while he still has value instead of risking going into 2013 with him and him potentially having another down year and cratering his value even more.

Masterson is a very interesting case. He's under team control for two more seasons, and likely won't get much of a raise after a disappointing 2013. He doesn't strike out a ton of hitters and relies on a sky high groundball rate to attain success. But after a breakout 2011, Masterson's walk and home run rates returned to their pre-'11 levels this past season, and his effectiveness dropped as a result. While I don't think there's a chance Masterson is going to flame out, I don't think he's going to ever be a top of the rotation ace. Remember Derek Lowe in his prime? That's Masterson, in my opinion. If a team like the Red Sox really wants him and is willing to give up a nice return, I'd be all over that. But if a team doesn't blow Cleveland away, it would be a classic case of selling low. Masterson might not be an ace, but he's a still a solid rotation piece that has value to Cleveland.

Perez is a no-brainer option to trade. He still has two years of arbitration left, but his salary will likely approach $6 million or so this year before spiking again for 2014. A small market, low budget team like that shouldn't spend that much on a closer, especially one who has caused so many issues off the field like Perez has. He's a typical capital C closer that doesn't provide a lot of value for the team, much like Francisco Cordero during his huge contract with the Reds. 2012 was the first season of his career where Perez had an acceptable walk rate, and he's had such an erratic career that paying him upwards of $13-15 million for the next two seasons isn't something that the Indians should find feasible at all. Plus, let's be honest: Vinnie Pestano is not only better than Perez, but cheaper as well. Those are the type of relievers that a team like the Indians should hoard.

Finally, there's Cabrera, who the team just gave a two-year contract extension to in April. While 2011 was a great year for the soon-to-be 27-year old, 2012 was merely "good". Cabrera's overall power took a hit, while his batting average and OBP stayed largely constant. Even with his drop to 2.9 fWAR, he's still a top ten shortstop in baseball. With Mike Aviles now in the fold, the Indians do have an in-house replacement for Cabrera, and one who is under control for the same two years at a lower salary (two years of arbitration for Aviles, as opposed to $16.5 million for Cabrera). Once again, the issue comes down to money and return. Cleveland would likely pay Aviles about $6 million over the next two seasons, a $10 million savings compared to Cabrera. If both produce at their 2012 levels, Cabrera would only be providing about two more wins of value, but due to both players' ages, add another two wins or so to Cabrera's overall production advantage. If a team is willing to part with a nice package of prospects or the Indians' pursestrings get tightened a little more this winter, make the move. Otherwise, hang on to him.