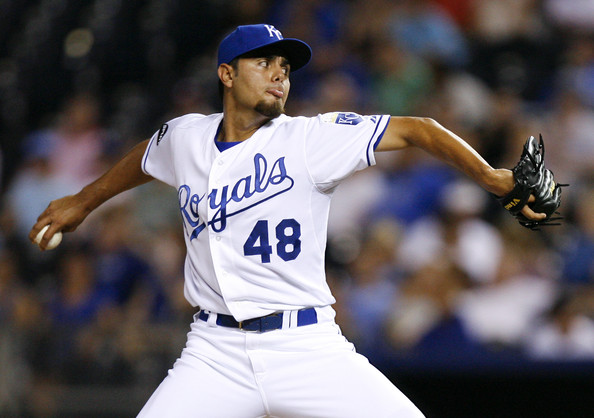 I normally don't write posts about options getting picked up or declined, but the Royals declining Joakim Soria's option for 2013 seems significant to me.

Soria missed all of the 2012 season after Tommy John surgery, and after he struggled in 2011, many suggested that the Royals should have looked into trading him and his favorable contract after that year. They didn't, and now, he's gone. The three year extension he signed in 2008 that had three options through the year 2014 was considered an extremely team friendly deal at the time, and the Royals still got good value out of it…they just didn't punt in time.

The Royals only ended up paying Soria $14.75 million over four seasons, including his buyout this year, out of a total possible $30.75 million. In the three seasons Soria actually pitched for the Royals on the contract, he saved 101 games, threw 179 innings, and struck out 200 while providing 4.7 fWAR for Kansas City, still a very good expenditure of their money despite him missing all of 2012.

If the Royals were smart (which isn't to say that they are), they'd make every attempt to bring Soria back. Before hurting his elbow, he was one of the best relievers in baseball. While Kansas City's bullpen is quite formidable without Soria, they'd be that much better *with* a healthy Soria. A low base salary/incentive-laden contract with option years is probably going to be what every team is offering Soria this offseason. The Royals have been working with Soria all year following the surgery, and if they feel his recovery is going well, they could potentially offer him a higher base salary to entice him to return, allowing the Royals to deal a more expensive reliever like Aaron Crow and have money to play with elsewhere.