The New York Mets have done a bit of an about-face in recent days regarding two of their more valuable trade assets. The team will not be trading first baseman Ike Davis, a decision likely spurred on by Lucas Duda's broken wrist, but will apparently be listening on NL Cy Young finalist RA Dickey.

Keeping Davis around is something we've advocated since the end of the regular series, but we did break down what teams could potentially be interested in Davis on the trade market. Despite hitting just .227 overall, Davis had a major bounceback in the second half of the year, hitting .255 with an .888 OPS and 20 homers, twice as many as David Wright (who had the second most on the team in the second half). Davis will be entering his first of four arbitration years this offseason. 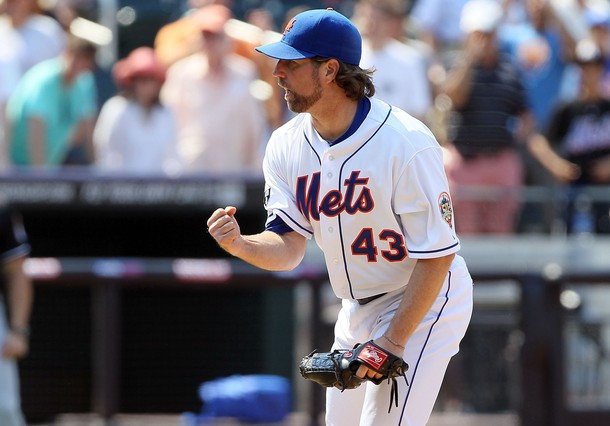 As for Dickey, I understand both sides of the coin in regards to trading him or giving him a contract extension. I wouldn't necessarily call the Mets a pitching rich team, but their rotation looks OK with or without Dickey due to the presence of young starters Jonathon Niese and Matt Harvey, along with top prospect Zach Wheeler and highly paid veteran Johan Santana. The rotation would clearly be better *with* Dickey in the fold, but it's not as if this would be one of the worst staffs in the league without him.

There are pros and cons to keeping Dickey for the Mets. While he's 38, he's a knuckleballer, meaning that there's less stress on his arm than the typical 38-year old. Between the majors and minors, Dickey has thrown just a hair above 2300 innings in his career. That's really not a lot, even without taking the knuckleball factor into account. In contrast, the 33-year old Santana has thrown nearly the same amount of innings as Dickey, while throwing harder, missing all of the 2011 season, and only throwing 117 innings this year. There is much less mileage on Dickey's arm than any other pitcher his age, meaning that the usual injury concerns could be shelved for him.

At the same time, while Dickey has had three fantastic years with the Mets, he took things to the next level in 2012. The man struck out nearly a batter per inning after not having a K rate over seven batters per nine in nearly a decade. But at the same time, 2012 saw Dickey throw his knuckleball harder than he ever had before, indicating a shift in his pitching style that could be sustainable in the future.

The Mets don't even really need to trade Dickey, with him under contract until 2013 at the bargain price of $5 million. New York isn't crying poverty with Dickey's contract, and keeping him wouldn't cripple the team's finances. If the Mets do trade Dickey, I don't think it would be until Zack Greinke and Anibal Sanchez both sign, setting a market for what the best starting pitchers on the market can get. Teams that strike out on both Greinke and Sanchez could be willing to pony up even more talent to trade for Dickey, which would be a very good thing for the Mets.