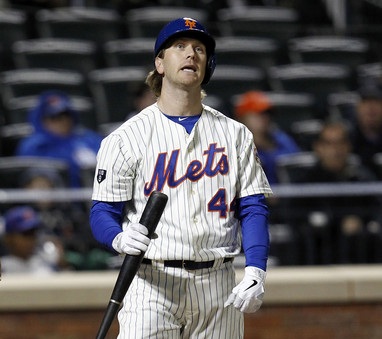 In a bit of shocking news out of New York, the Mets and outfielder Jason Bay have mutually agreed to part ways. Bay is getting his entire $17 million salary for 2013, as well as the buyout on his option in 2014 for $3 million, and $2 million owed to him as a signing bonus. When you look past the nice phrasing, it's essentially a straight up release.

Bay's tenure with the Mets was a complete disaster. After signing with the team prior to the 2010 season, he played in just 288 out of a total of 486 games, homering a total of 26 times over those 288 games. In contrast, Bay hit 31 homers in 2008, and 36 in 2009. To make matters even worse, Bay made a total of $42.75 million over those three seasons, while accumulating only 1.4 fWAR for the Mets. Putting that in perspective, Andres Torres was worth 1.7 fWAR for the Mets in 2012, and the team is still kicking around the idea of nontendering him this winter.

This is probably for the best for both the Mets and Bay. It'll give Bay an attempt at a fresh start with another club, likely at the league minimum salary. As for the Mets, they can move on from this disastrous contract and continue looking towards the future, potentially playing a young player in left field and trying to create some value in the outfield.