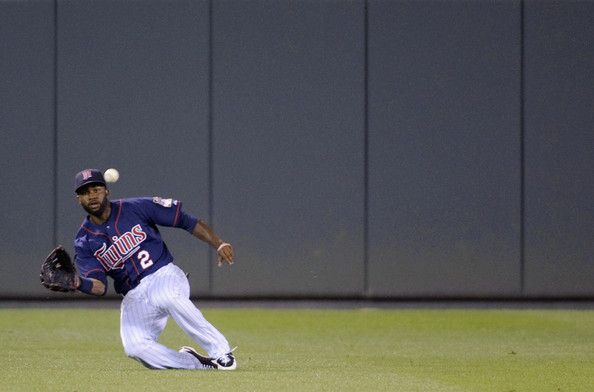 The Washington Nationals acquired a much-desired player on Thursday, picking up center fielder Denard Span from the Minnesota Twins in exchange for minor league pitcher Alex Meyer. The 22-year old Meyer was a first round pick of the Nationals in 2011, #23 overall.

The move will have an impact around the league., and on more than just Washington's outfield. With Span's acquisition, the Nationals can now move Bryce Harper to left. Even though Harper's glove played well in center this season, Span is an excellent defender as well, leaving left for the better bat of Harper. Harper shifting to left field will likely send incumbent left fielder Michael Morse to first base, meaning a likely end to Washington's attempts at retaining free agent first baseman Adam LaRoche.

This trade is clearly all about defense for the Nationals, as Span's bat (.746 OPS, 23 career homers, 90 career steals in 589 games) is nothing to write home about. But Washington gains a lot defensively with Span essentially replacing the lead gloved Morse in the outfield. Jayson Werth has been a disappointment defensively in right, and part of me thinks this could be a precursor to dealing Morse and shifting Werth to first base.

With the Braves signing of BJ Upton yesterday, rumors were also circulating that they were considering dealing for Span as well to fill their other outfield hole. But now, Span is off the market, and so is another option for the Braves. The Phillies, losers in the Upton sweepstakes, are also put in a difficult spot with another division rival strengthening their club and another potential option for them vanishing from the market. You have to think that things are getting mighty interesting around the Angel Pagan household.

Finally, the lone player going to Minnesota in the deal, Meyer…with just one pro season under his belt, there are rumblings that Meyer may end up in the bullpen. Over 129 innings in A-ball and high-A, Meyer struck out 139 and walked 45. Meyer's fastball sits in the mid-90s, and ticked up to 97 this season. As a college arm out of the University of Kentucky, Meyer should move fast through Minnesota's system, but his endgame is currently unknown.

The Nationals should be commended for swiping one of their prime targets for years in exchange for a prospect whose future remains partly cloudy. You have to wonder just what the Twins were asking for from the Braves in relation to Span that couldn't get the deal done, because Atlanta has plenty of college level arms that might end up being better than Meyer at the end of the day.