Baseball’s offseason is under way, which means MLB teams are acting like kids that just graduated from the eighth grade flush with cash from their aunts and uncles. They have holes to fill and the means to fix them. With the Winter Meetings coming up soon, the deals are going to start hitting fast and furious.

However, there are bound to be some deals that teams will regret and this particular offseason seems ripe for those sorts of contracts. The talent level isn’t as great as it has been in other years, and average to mediocre players are set to cash in.

Which players stand out as the ones who will be the most overpaid? Let’s take a shot at making a list:

A few years ago, Nova bought a scratch-off lottery ticket and uncovered three “2016” symbols, which won him the chance to hit free agency in a year where the starting pitching market is the thinnest it’s been in recent memory. He’s never reached 180 innings in a season, nor has he shown that he can lead a rotation, yet he’s going to get paid like a top of the rotation starter when, in reality, he’s better suited as a fourth or fifth option. Talk about being in the right place at the right time.

He’s likely to find a multi-year deal this winter after settling for a one-year deal last year, but the team that gives it to him might not be happy with the results. Desmond got off to a great start, posting an .899 OPS in the first half while making the AL All-Star team. He fell apart the rest of the way though, with an OPS of .630 more in line with his disappointing 2015 season. Some team will bank on Desmond’s first half, though, and give him an annual salary more in line with those numbers. That could be a risky proposition.

When he’s healthy and pitching, he’s great. The problem is, you never know when that’s going to be. Hill only managed 20 starts and 110.1 innings this year, and he’ll be 37 with a long history of injuries on his resume when next season starts. Is he worth the risk in a pitching-starved market? Absolutely. But the question is, how big of a risk is a team willing to take? Hill could end up being the highest paid pitcher on the market this winter, and he’s also the most fragile.

You could copy-and-paste the reasons for any of these starting pitchers being overpaid and they’d still make sense no matter whose name you put it under. Hammel is a decent enough pitcher who can fill out a rotation, but he’s probably going to get paid like he’s Ivan Nova (you know, a true top of the rotation guy). He’s failed to reach 180 innings over 11 big league seasons. 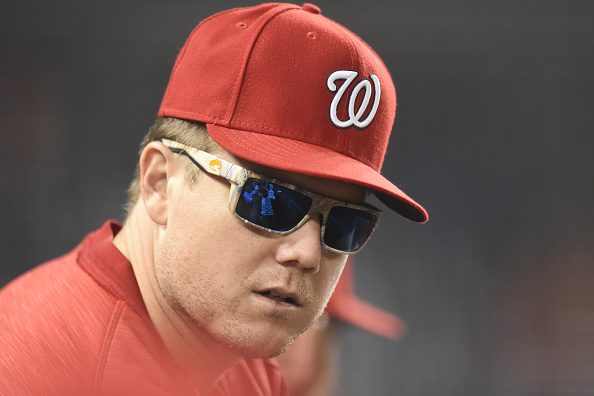 BALTIMORE, MD – JUNE 28: Jonathan Papelbon #58 of the Washington Nationals looks on during a baseball game against the New York Mets at Nationals Park on June 28, 2016 in Washington, DC. (Photo by Mitchell Layton/Getty Images)

It’s the offseason of the closer, which means teams that lose out on the big names on the market might be willing to pay a premium for the lower tier. Enter Papelbon, fresh off of losing his job in Washington and generally ticking off everyone in the vicinity of Nationals Park. He’s no longer elite, but a team with an opening in the bullpen might think enough of him to give him a shot. There’s a chance Papelbon could end up on the bargain list, but smart money probably goes to “overpaid.”

He’s coming off of his worst WAR season since 2008, with his worst OPS and least amount of homers since 2009. He’s still a dangerous hitter, but is probably going to be paid like an elite slugger and he just isn’t one anymore. Bautista will be in line for one more big payday, but based on his production and his age, it’ll probably be too big of one to be worth it.

Dingers! Trumbo slugged 47 homers last year, drove in 108 runs, had an .850 OPS, and still managed just a 1.6 WAR. He doesn’t get on base, strikes out a ton, and is a disaster in the outfield. Still, some team will pay big for the power he’ll bring to the middle of a lineup. But that team would be wise to remember that power can be fleeting. Of all the names on this list, Trumbo is the one that stands out as potentially the most overpaid.

He’s been really, really good over the past four years and he’s hitting the market at a time where teams are putting a huge premium on elite relievers. Melancon will be paid like one, but there’s an argument to be made that he’s not quite at that level. He’s a reliever that relies on bad contact and control to get guys out, and without a devastating fastball to back it up, it’s easy imagine Melancon losing effectiveness over the length of a free agent contract. His could be a contract that pays off in the short term, but doesn’t look so hot a few years down the road.

Dave Tobener has been writing about baseball for the better part of a decade. He's been to more Giants games than he can remember and was there when Ruben Rivera forgot how to run the bases. Follow him on Twitter: @gggiants