The Texas Rangers made history during the 2016 MLB season. In one-run games, the Rangers went 36-11, the best record in one-run games in MLB history. In games decided by two or more runs, Texas was a more pedestrian 59-56, getting outscored by 33 runs over those 115 games. They only lost a total of four (FOUR!) one run games in the second half of the season. But against the Toronto Blue Jays in the AL Division Series, emotions will be high, and given the history between the two teams, that fortune in one-run games may not continue.

The Rangers are clicking on all cylinders going into the Postseason, while the Blue Jays scuffled through September. Their 11 inning win over the Orioles in the AL Wild Card game put the team’s rotation in an interesting position, as both Marcus Stroman and Francisco Liriano were burned in the game. Thankfully for the Jays, they’ve still got Marco Estrada, J.A. Happ, and Aaron Sanchez lined up to start the first three games against the Rangers, with Stroman going in Game 4. Texas counters with their own threesome of Cole Hamels, Yu Darvish, and Colby Lewis. On paper, Texas seemingly has an advantage in Game 1, while Game 2 is a virtual push and Game 3 goes in favor of Toronto.

Hamels has been brilliant all season for the Rangers, striking out 200 in 200 2/3 innings and notching a 3.32 ERA. However, he has been homer-prone, which could be an issue against the Jays – he’s given up 24 longballs this season, though 15 of those dingers came in his first 13 starts of the year. Darvish hasn’t been at 100% all season, making just 17 starts in his return from Tommy John surgery and pitching to a 3.41 ERA, striking out 132 and walking 31. In his final two starts of the year, he allowed just one run on five hits over 13 innings, striking out 21 and walking two. However, he got hammered in two of his three starts before those final two.

As for Lewis, he hasn’t been very good since coming off the DL last month – in four starts, he’s thrown 18 1/3 innings, struck out 12, walked nine, and pitched to a 6.38 ERA. Like Hamels, he’s also been homer-prone, allowing a whopping 19 homers in his 19 starts. 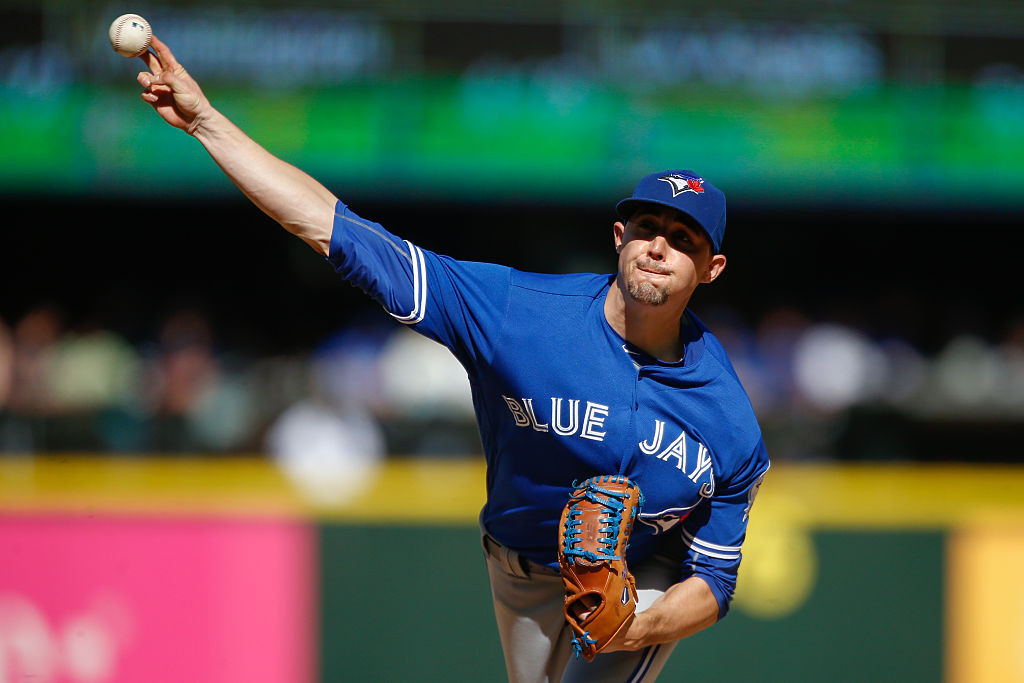 Estrada got off to a great start for the Jays, but has come back to Earth in the second half – his ERA after the All-Star Break is 4.27, and he’s struck out 66 while walking 26 in 71 2/3 innings. Before the Break, he had a 2.93 ERA along with 99 strikeouts and 39 walks in 104 1/3 innings. The 33-year old Happ has been great all year – he’s rolled off quality starts in four of his final five starts of the season, though his last start against the Red Sox on Saturday resulted in Happ striking out just one hitter and walking five over 6 1/3. Sanchez has also had a career year for the Jays, though it’s not unfair to question how much is left in his tank – the 192 innings he’s tossed this season are a career-high. Five of his final six starts of the season fell into the “quality” bucket, so he hasn’t shown any signs of fatigue – yet.

Despite the success of Toronto’s bullpen against Baltimore in the AL Wild Card game, the advantage here falls to the Rangers, and is part of the reason they’ve been so good in one-run games this season. Matt Bush has been a revelation in middle relief this year, striking out 61 and walking 14 in 61 2/3 innings. Closer Sam Dyson has converted 38 save opportunities while getting groundballs at a 65% clip. Tony Barnette, Alex Claudio, and Jake Diekman have all also been excellent. By the way – Diekman is the only one of those five with an ERA higher than 2.79. The Jays’ pen doesn’t have that kind of ceiling, though closer Roberto Osuna and middle reliever Joe Biagini have been very good this year. There hasn’t been a great bridge to get to those two, however.

Offensively, the Jays are a better side, but you knew that already. Guys like Jose Bautista, Josh Donaldson, Edwin Encarnacion, Russell Martin, and Troy Tulowitzki are household names, though only Donaldson and Encarnacion have been truly excellent this year. Michael Saunders, one of Toronto’s breakout stars in the first half, has been a disaster in the second half, and Toronto also hasn’t gotten a whole lot offensively from second base, center field, and the non-Encarnacion half of their first base/DH platoon this year. 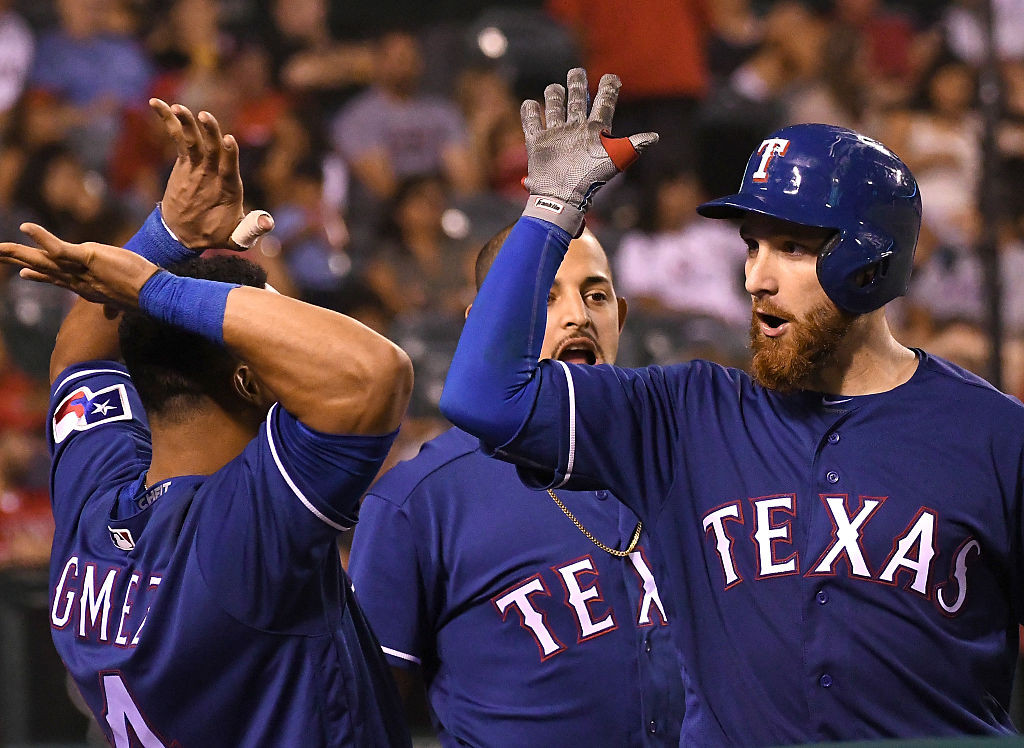 ANAHEIM, CA – SEPTEMBER 10: Jonathan Lucroy #25 of the Texas Rangers gets high fives from Rougned Odor #12 and Carlos Gomez #14 after a 2 run home run in the eighth inning of the game against the Los Angeles Angels at Angel Stadium of Anaheim on September 10, 2016 in Anaheim, California. (Photo by Jayne Kamin-Oncea/Getty Images)

The Rangers are a more balanced side, though they have their own flaws. Ian Desmond, their own first half breakout star, has been a mess in the second half. Former Brewers teammates Carlos Gomez and Jonathan Lucroy have teamed up again in Texas, combining for 19 homers in 80 games between them since coming over around the trade deadline. The double play combination of Elvis Andrus and Rougned Odor has been a capable offensive pairing, with Odor launching 33 homers and hitting .271/.296/.502 and Andrus hitting .302/.362/.439 for the year. And then, there’s Adrian Beltre, cruising right along with a .300/.358/.521 line with 32 homers.

So, which team will win? Game 2 seems to be the critical point in this series – Darvish has had a strong year, but he’s been beatable, while Happ has been excellent for Toronto. If the Jays can steal Game 2 (or, somehow, Game 1) in Texas, they can definitely win two straight at Rogers Centre with Sanchez and Stroman on the hill to end the series. But if the Rangers manage to grab the first two games, it’s going to be an uphill climb for the Blue Jays, needing to beat both Hamels and Darvish in back to back games to win the series.